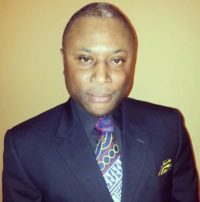 A long-time journalist and public relations specialist who now works as an international Security Cooperation Manager for the US Government, Don Julio brings with him extensive experience in corporate communications and social media management.

Don Julio holds a First degree in Public Law and Political Science from the University of Yaounde, a Senior Journalist Diploma (with specialization in Public Relations and Political Analysis) from the Advanced School of Mass Communication in Yaounde, Cameroon, and a Master of Business Administration (MBA) from Columbia Southern University, in the USA.

Don Julio has lived or worked in 16 countries on five continents, beginning in his native Cameroon, where he worked as a political reporter in French for Challenge Hebdo, La Nouvelle Expression and Postwatch; then as Managing Editor of Cameroon Post. Don Julio was also a local correspondent (French and English) for the Voice of America (VOA). He spent three years in Japan, during which time he worked as a regional correspondent for Japan Times, freelancing for BBC and Jeune Afrique Economie, and then as Managing Editor of the Japan Update newspaper based in Okinawa.

Don Julio is a former member of the California National Guard, currently serving in the US Army Reserves as an Individual Member Augmentee (IMA) with US AFRICOM in Stuttgart, Germany. He has served in the past in places such as Guantanamo Bay, Cuba, Korea, Kosovo, Burkina Faso, Mozambique, Niger and Hawaii. Don Julio is currently working on one of such assignments as a Special Projects Manager for the Office of Security Cooperation at the US Embassy in N’Djamena, Chad.